Follow Not Just a Long Holiday – Back in New York! on WordPress.com

There was an error retrieving images from Instagram. An attempt will be remade in a few minutes.

The night bus was luxurious and we slept all the way to Guatemala City. Expecting a bus terminal there, we were surprised to find ourselves at a random laneway surrounded with densely barbed wire houses. We were all quickly divided and shuffled into collectivos (van) going to different destinations. It felt all a little shady under the bright yellow street lamps and hurried mannerisms of the guys picking us up. The high fences around the houses confirmed our decision of not spending anytime in Guatemala City. 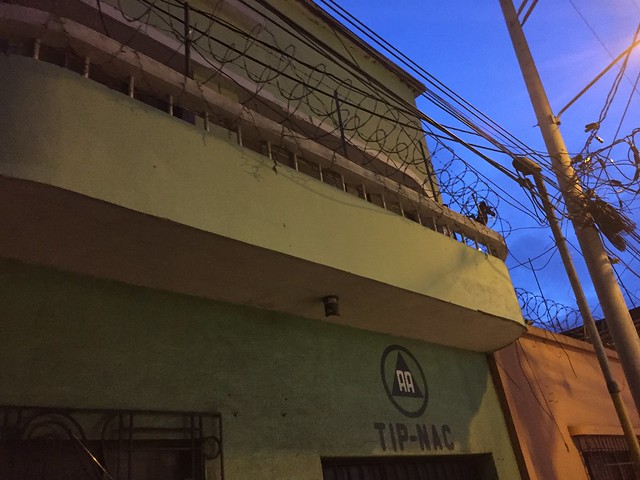 We were dropped off at Antigua just as the morning sun was coming up. With no prior bookings we started walking totally distracted by the cobbled stoned streets laid out in a neat grid with no traffic lights and lined by not more than two-storied houses. The town looks ‘protected’ by the surrounding tall volcanoes with one of them puffing every half hour. You could see the volcanoes from every part of the town. Never seen anything like this before! 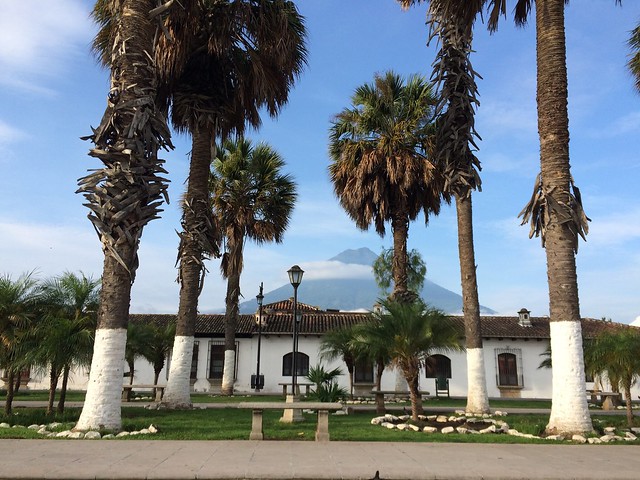 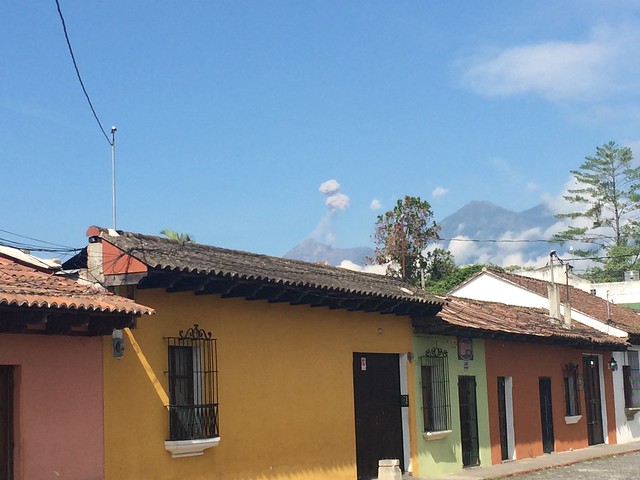 We were turned down by two hostels as we woke up the sleepy hostel owners. We gave up and went to Samsara for some very nice coffee and tasty breakfast. It was complete with a touch of Guatemalan beans, avocado, black tortilla and steamed sweet plantains for the perfect sweet ending. 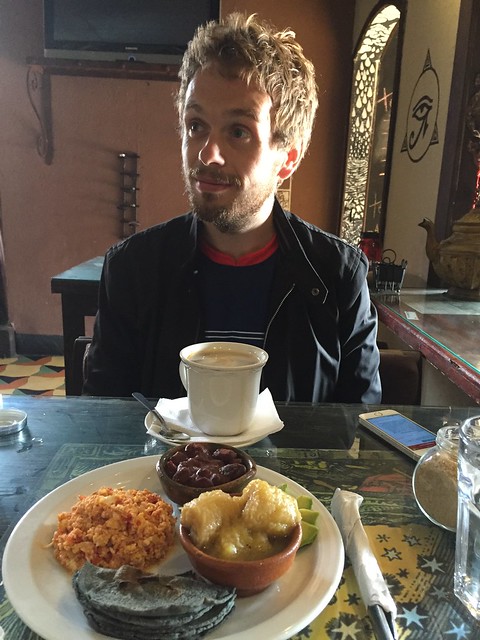 Tummies full we put our back packs on again and continued our search for a hostel. We settled on a small boutique casa, per another hostels recommendation and quote price which was way cheaper than their actual price. The private room turned out to be great for catching up on the Game of Thrones season and kitchen for cooking noodles and tacos. The rooms were not ready so we cleaned up with some baby wipes and strolled into town which now buzzing. I was loving the cool weather and lack of humidity, especially after the last week where I had swapped mosquito repellent for my moisturizer. Who doesn’t like to smell of deet!

We walked to the chocolate museum and managed to wiggle ourselves into the morning class. Pablo, our teacher was very knowledgeable and entertained adults as well as kids in our group. The explained the whole process of chocolate making from the cacao trees, which are abundant in parts of central and South America, to the extraction of coco powder and butter. He gave us the history of how Europe is known for its chocolate even though no cacao trees actually grow there. The Spanish not only colonized Latin America but also took their chocolate and put their sweet twist on it. Literally. Mayans made chocolate drinks with hot water and spices, which we made and tried in the class. We learnt the evolution of chocolate from the Mayan era to the Spanish and a little bit about today’s industrialization of it. 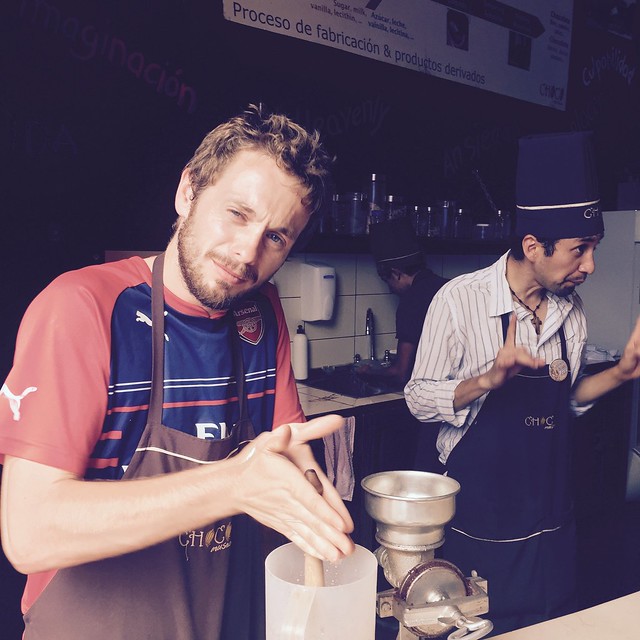 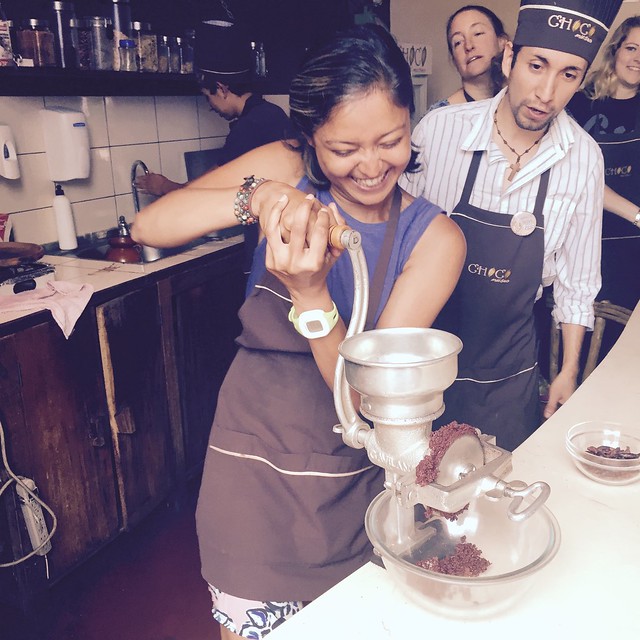 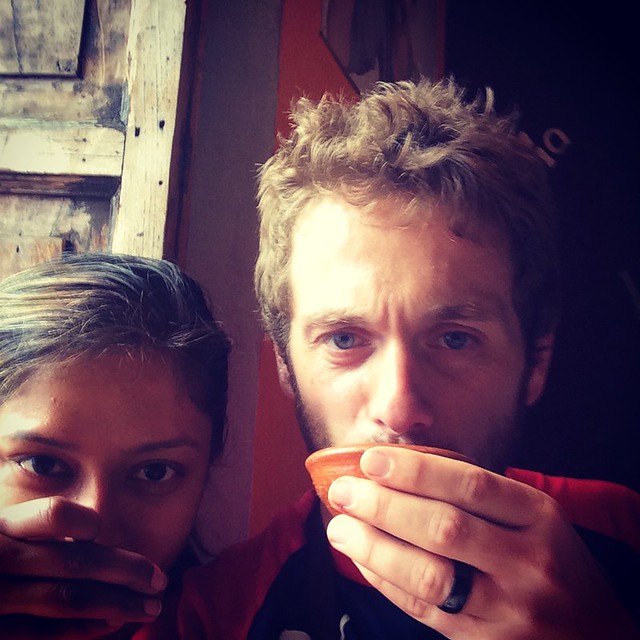 We made or rather poured some chocolate with our favorite toppings, letting our creativity out. Refrigerated them and picked them up a few hours later. 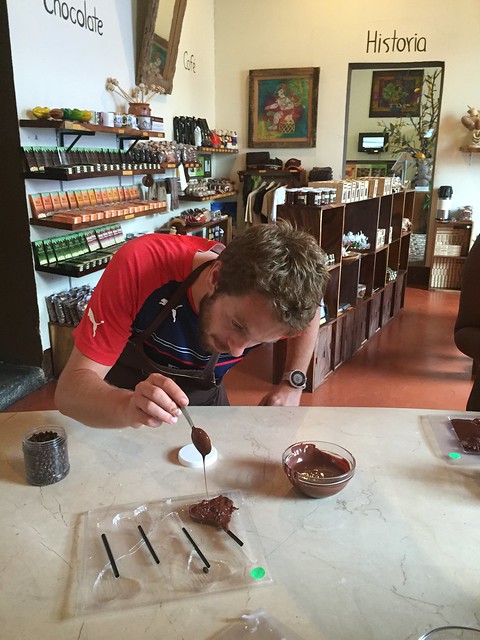 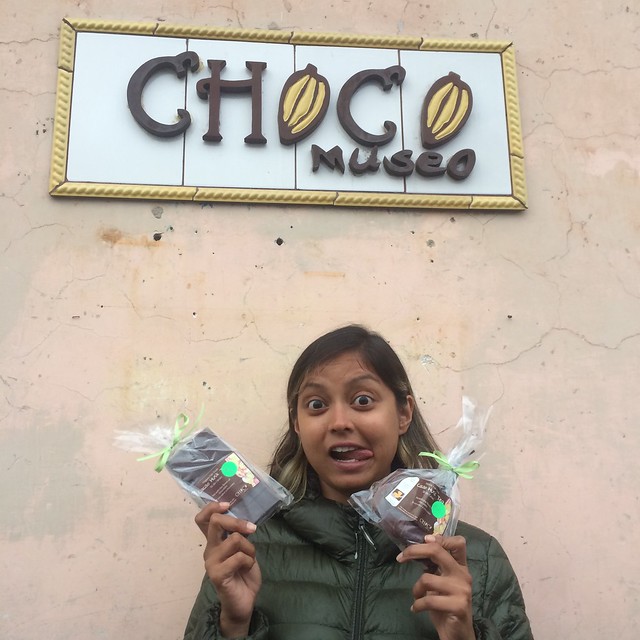 The local markets were fascinating with their arts and crafts exhibition, San Simon figures and Mayan robes. There were lots of jade stores selling authentic jade jewelry manned by ladies in Mayan outfits speaking crisp English. Slightly disorienting! The jade was really beautiful and I wish I had the heart and budget to buy a piece. We also came across lots of Mayan-dressed-modern people with purses and Nokia phones which are almost antique now. Our casa receptionist was one of them.
The main local church was beautiful with yellow colonial architecture and soon became our favorite spot in Antigua. On weekends local families sold mouth watering delicacies making a mini food market right outside the church. 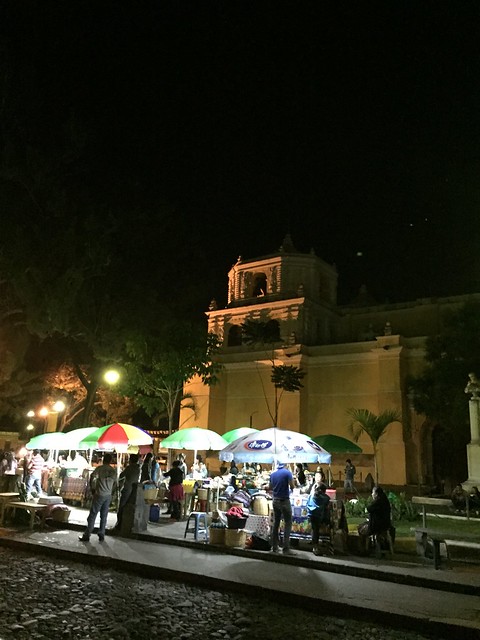 Antigua is considered the holiday town for Guatemala and is flocked with local tourists on weekends. A couple of them spoke English and helped us decipher the mysterious looking dishes and drinks and try them too. The sweet arroz con leche (rice in milk – almost like the Indian kheer) and Corn Atole (corn & cinnamon in milk) made for yummy warm cups of goodness in the chilly weather. Arroz con leche was Ollie’s favorite and he even made friends with the vendor who gave him an extra cup the second weekend. We eat and drank along with the locals after Saturday evening mass. 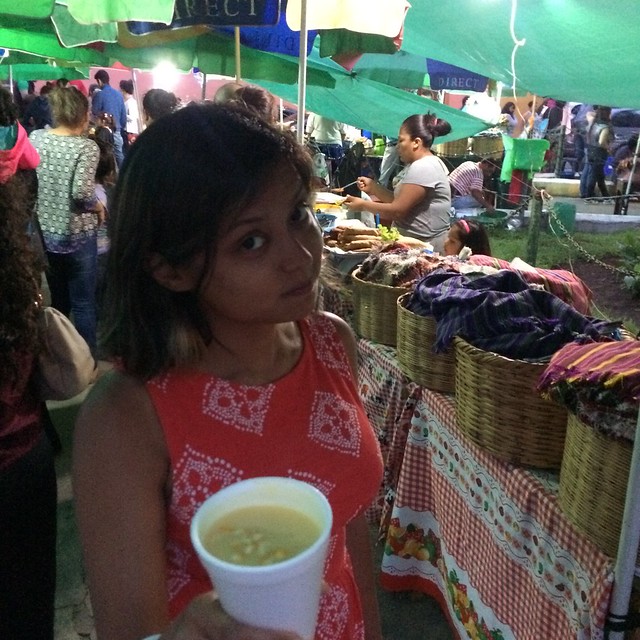 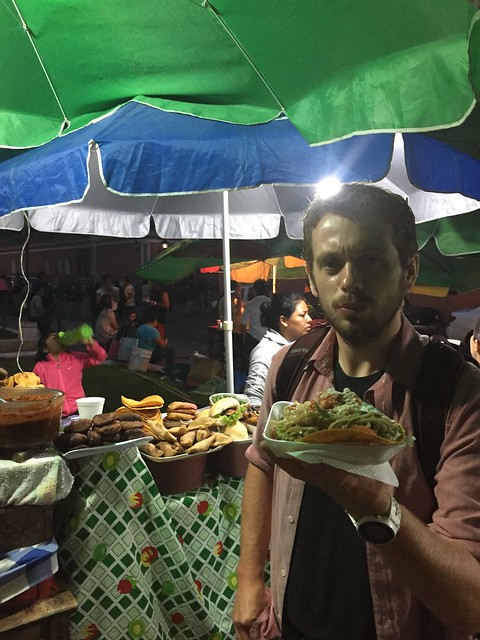 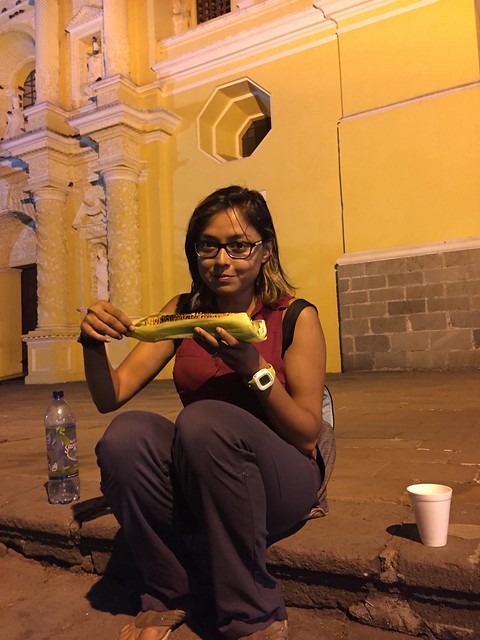 Another striking thing about Antigua was to see the number of expatriates in the hospitality industry working at all restaurants, cafes, bars and hostels. We spent the evening at the Snug, an Irish bar, filled with local expats from Ireland and USA. We not only got some great tips for touring but also learnt a lot about the safety issues, abundant expats and their integration with the indigenous people in town as they are all in the tourism industry. Cafe NoSe was another favorite of ours with happy hour pizza deals to go with their mezcal cocktails.

We visited the Earth Lodge which is a hostel on top of the mountains with a beautiful view of the valley below. The hostel is amidst avocado farms and served delicious lunch with avocado in every dish. It is self sustained hostel run by volunteers who also teach under privileged students at a nearby school. Now this is the kind of place we should have stayed at to begin with. Near the lodge is a good & slightly challenging hike through some avocado & coffee farms offering some nice views of the volcano built valley below. Here I am posing in front of these along with Ollie enjoying some delicious food from the Earth Lodge 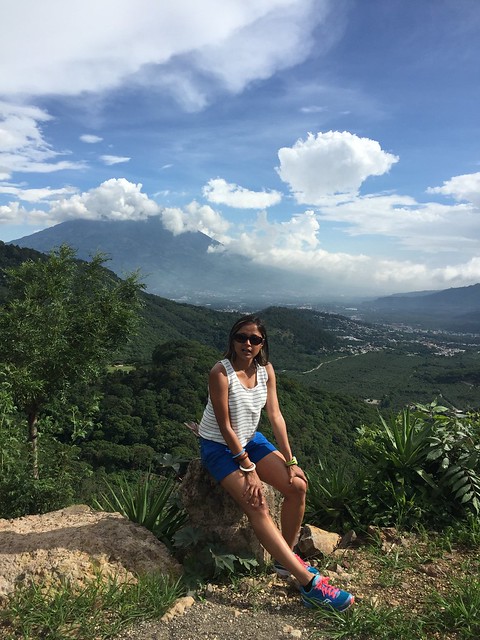 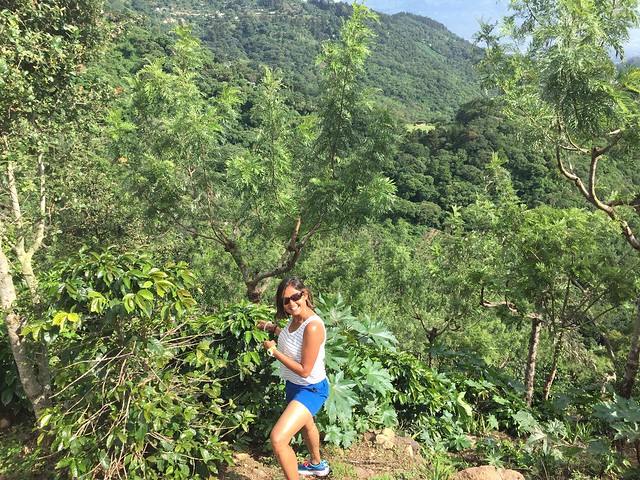 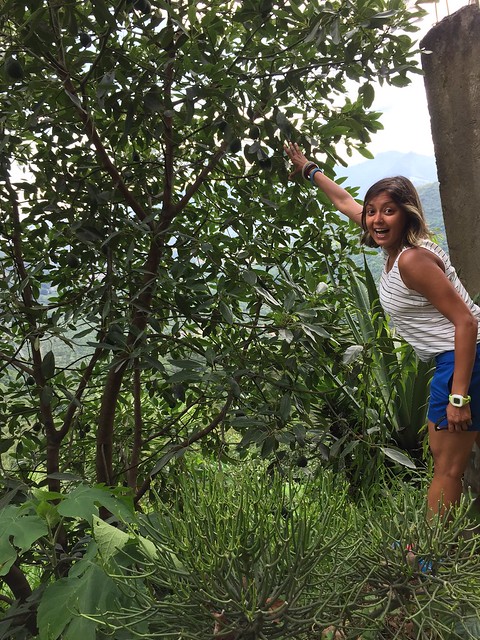 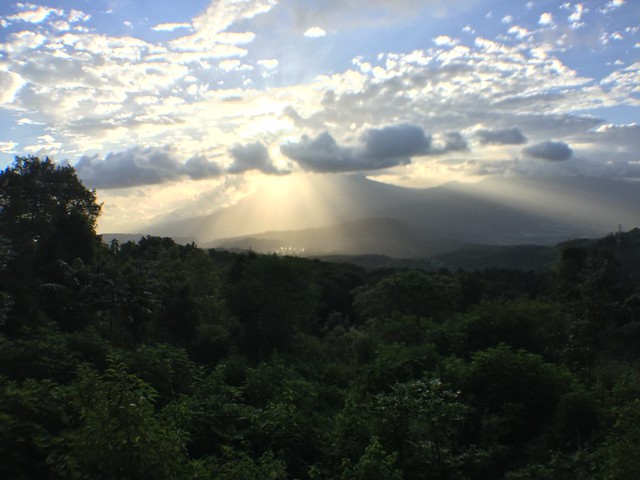 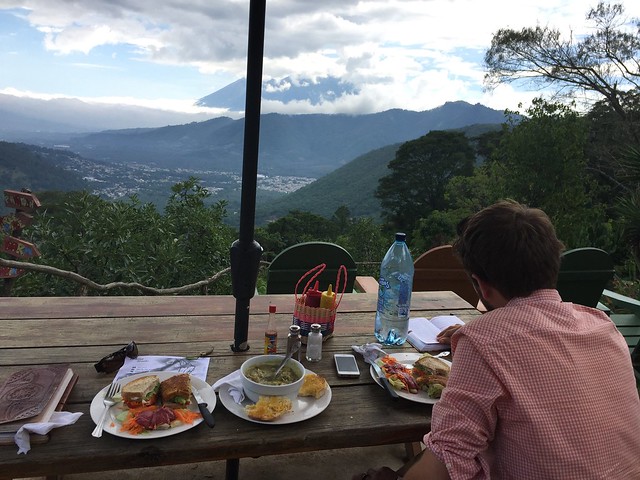 We spent an afternoon in the zocalo park bench eating mangoes and got chatting to a local lady trying to sell bracelets. I bought a couple from her as she shared her story and taught me Spanish for haggling at the markets. 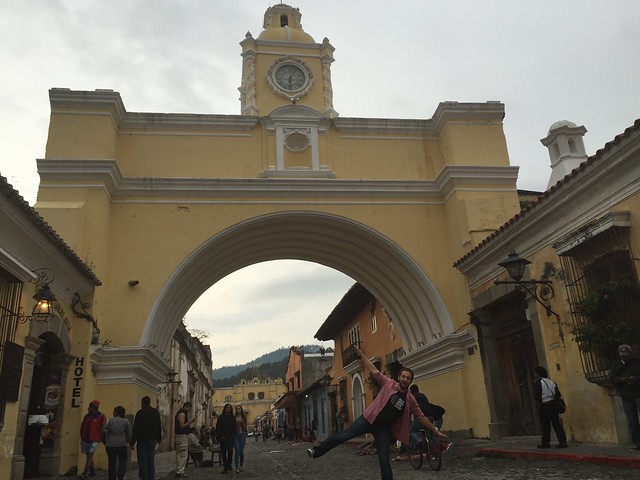 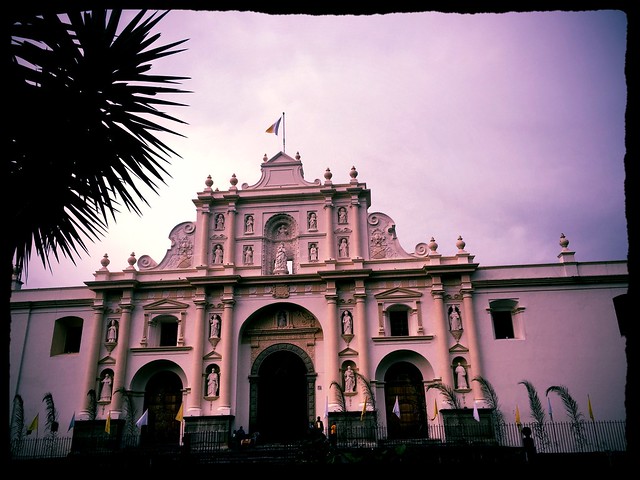 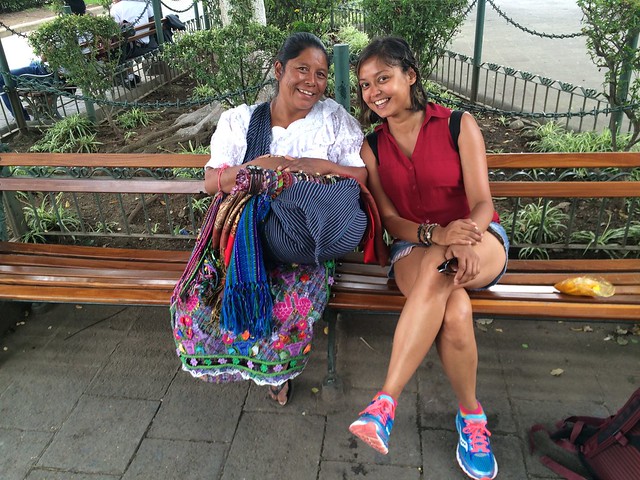 We came back to Antigua the second weekend again as we couldn’t get enough of the food and drinks outside the church but we also had to go up at least one of the surrounding volcanoes. We picked the Pacaya volcano that last erupted in 2010 and is still hot and steaming. You can’t go to the crater of course but we could definitely toast some marshmallows on it. Yummy! 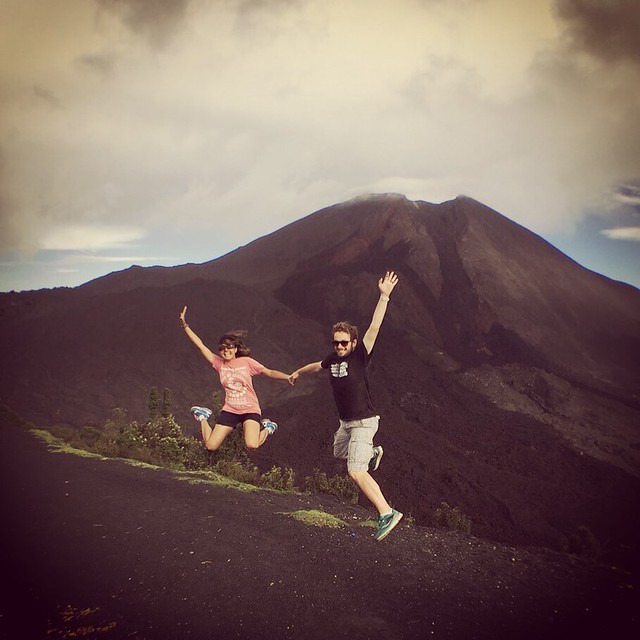 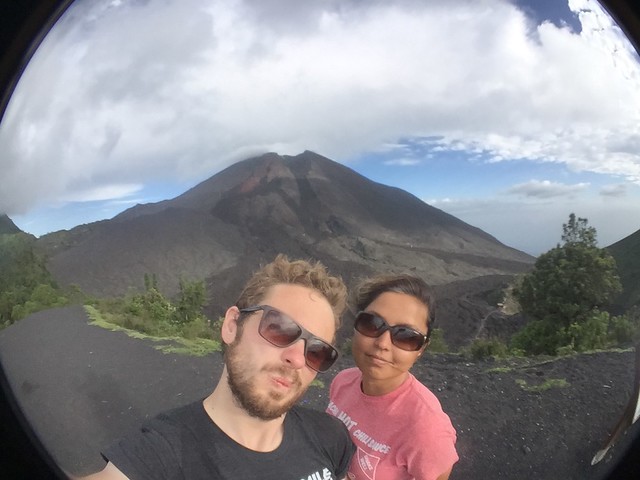 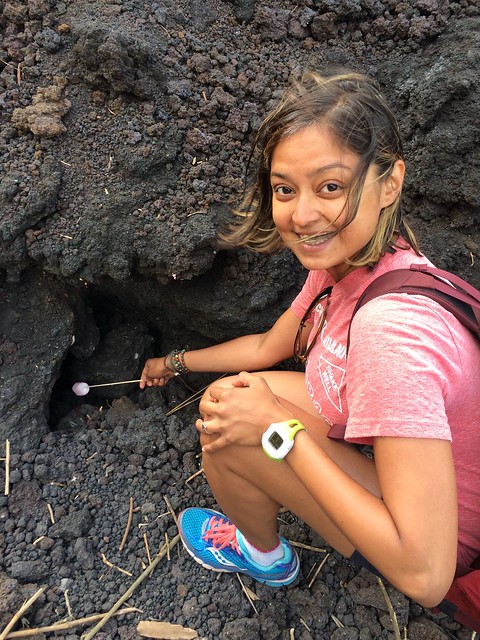 Neem was born and raised in the city that never sleeps – Bombay (Mumbai). She moved to snowy Syracuse to study and spend two wonderful years making great memories with her new-found friends. She was then lured to the other city that never sleeps – New York City, for work, and felt right at home. She couldn’t have ask for more when Ollie moved in and decided he wanted Neem as his room-mate forever! View all posts by Neem